“A Book that can be Read”: Creating and Teaching with Custom Digital Editions of Historical Texts

“When a book leaves its author's desk it changes. Even before anyone has read it, before eyes other than its creator's have looked upon a single phrase, it is irretrievably altered. It has become a book that can be read. . .”

I teach an introduction to American Literature course most semesters and part of my regular preparation is a debate with myself about which editions to adopt. As a nineteenth-century specialist, most of the texts I assign are long out of copyright and widely available through Project Gutenberg, Archive,org, Google Books, and the usual academic publishers.

The questions I ask myself are likely familiar to other instructors: What edition is best? How valuable is it for every student to have the same edition? What is a reasonable cost burden? How reasonable is it to expect students to purchase a specific edition if a text is easily found online for free?

Each semester I calculate my decision slightly differently, but it always seems like a compromise. It’s hard to find an inexpensive edition of The Coquette (1797), for example, because it’s not popular enough for a mass-market paperback and it’s short enough to rarely be published on its own. The cheapest edition of Benjamin Franklin’s Autobiography (1791) doesn’t have the helpful notes that a more expensive teaching edition offers. PDFs from online repositories are rarely optimized for screen readers and OCR is unreliable. There’s also something to the look and feel of online editions—who wants to sit at their computer and read Moby-Dick from a web page?

With all this in mind, I tried something different last semester. I experimented with creating my own teaching editions of the required texts as ebooks (.epub) and publishing them on CUNY Manifold. It proved successful well beyond my expectations because in addition to the customization that I was able to achieve, there were surprising additional benefits from the way everyone in class could collaboratively annotate the texts.

With the epub format I was able to create digital books that rivaled professionally designed editions but with my own additional content. The epub format is obviously meant for ereaders such as Kindle or iPad, but combined with the web-based ereader built into Manifold, students had ready access to the course texts from nearly any device. It is important to my ethics, too, that I offered the textbooks to students and other instructors for free and with a Creative Commons license that allows the texts to be freely remixed and reused.

The school where I teach outsourced its bookstore several years ago, so students are shepherded to an online marketplace for textbooks and the site already pushes digital editions—even if it’s not the cheapest option. So I wasn’t worried about student resistance to digital texts, but I felt the need to to make a case for my editions in class.

With colleagues I’ve joked about the voice of self-doubt that surfaces with new scholarly projects. With this project, it quietly questioned on what authority I could claim to students that my editions were as good as something from a reputable publisher. In this case, the voice helpfully made me think carefully about how I designed the texts and about my editorial intervention. It also encouraged me to model good textual scholarship for students and engage them throughout the course in a conversation about textual variants, editorial decisions, and the circuits through which texts move.

I explained to students how I created the texts. Epubs are essentially websites with multiple pages (usually correlating to chapters or sections), a CSS file (allowing aesthetic customization), and resources (such as images). I carefully chose open-source transcriptions of the required texts, checked them against freely available scans of first editions, and then modified the texts to suit my needs, adding notes, historical and contextual documents, and in some cases even images and diagrams. 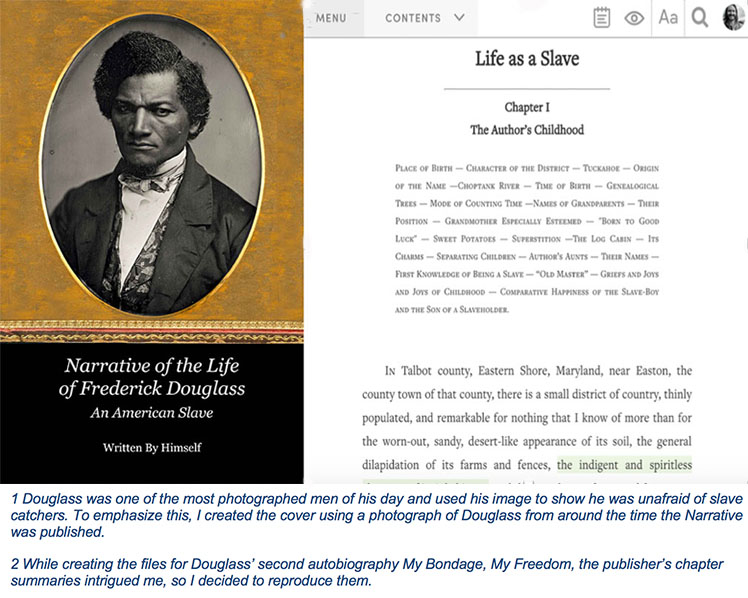 Take, for example Frederick Douglass’ first two autobiographies, The Narrative of Frederick Douglass (1845) and My Bondage, My Freedom (1855). While the texts for these works are freely available, the paratextual elements such as introductions, letters of support, even frontispieces are key components of how modern scholars understand these works. In recognition of this fact, nearly every published copy of these texts reproduces them in some way, but the act of making the decisions myself about how these elements look and take up space sparked a new kind of engagement with the text.

Another unanticipated benefit of the experiment is the annotations that the students and I built-up over the course of the semester. Manifold allows readers to publicly and privately annotate texts published on the platform, so I asked students to make notes as they read. At first I treated this as an assignment, checking comments and responding. Soon, I noticed that students’ comments were more revealing when I didn’t intervene, though.

Sure, students sometimes noted misreadings or recorded strained interpretations, but they just as often expressed delight or surprise, asked questions, even fell into lively discussions with other readers in comment threads. All of this helped me understand their reading processes much better than with graded annotations. Crucially, instead of it feeling like every student had their own text, it felt like we shared the text and so were collaboratively building a resource. The highlighting from one student could provoke new questions from another student, for instance. In class, we could project this shared text on the board and use the annotations to jump-start discussions. Notes could be taken directly into the text and would be there for anyone when it came time to write the essay.

Best of all, the annotations remain. Students often have the option to “rent” digital texts, which means that after a period of days, the text disappears. Not only do students have unlimited access to the editions we created, but to our shared annotations. If a student wants to revisit a text for a future project, or maybe to fix up an essay for an application, it’s as easy as picking the book up off the shelf. When I use these resources to teach again, the blank margins that sometimes intimidate students will be gone and so students will be already immersed in a literary discussion while they read. 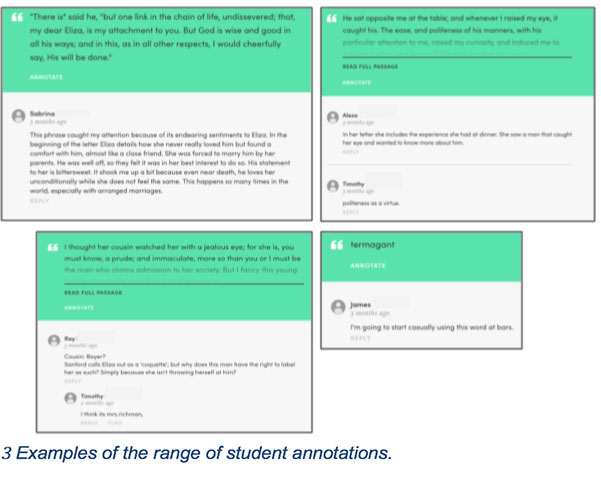 Making high-quality epubs takes time and some knowledge of HTML/CSS, so it’s not a quick or easy option for everyone. For me, though, epubs have proved incredibly useful and something with which I’ll continue to experiment.