Under the last dead lamp

Returned to its true task, interrogation of silence.

The cliché is that surprise meetings and unforeseen circumstances can shape our futures, that long-lasting influences build from stray moments, from chance. This is not one of those stories, indeed, it is the very opposite. This is the story of planned serendipity. I meant for this to happen.

In Scotland, George Mackay Brown’s presence is inescapable. He was my country’s greatest twentieth century poet, the only one able to capture perfectly its landscape, people and rhythms, even though he did so by focusing his life’s work entirely on one remote place, the Orkney Islands.

The Orkneys are a chain of about 70 craggy islands that ease out from the extreme northernmost point of Scotland. Serving as a dotted line separating the North Sea from the Atlantic, the Orkneys are home to puffins, harriers, whales, seals. The capital, Stromness, George’s lifelong home, is a windswept place, but surprisingly mild considering its northern exposure, rarely above 60 degrees in the summer, and rarely below freezing in the winter. In the summer, the sun shines for 18 hours, but in the winter, night ends at 9:00 am and begins again at 3:00 pm. Despite or perhaps in spite of this, the islands have been inhabited for 10,000 years, by the Picts, by the Vikings, by the Scots. George used every single fiber of Orkney history in his writing, from the sagas of the Vikings to the rituals of the Celtic missionaries, and before he died in 1996, he found acclaim as a poet, novelist, short story writer, librettist. 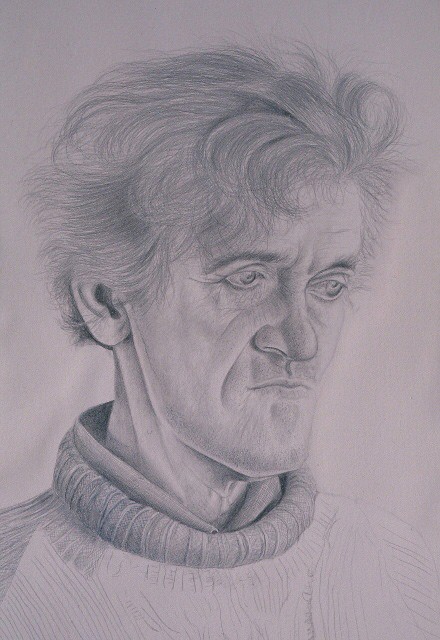 I had been reading George’s poetry for several years, but it was whilst I was studying in Dundee Art School that I finally put some of his lines into my own work, making a series of intaglio etchings. After graduating with my MFA, I felt confident enough to contact him. After hemming and hawing, I phoned him, and asked if he would be willing to pose for me. Now, George always had an exact circumscribed telephone manner, so I got a straight-forward reply: “Why alright, but I can’t see what you would make out of my face, it’s no Mona Lisa. Contact me when you’re in Stromness.”

At the time of that first phone call, I was in London on a scholarship to study old diving helmets in the National Maritime Museum at the time, but the next morning I was on the early train from Euston to Inverness. Nervously, and with great trepidation I knocked on the door of 3, Mayburn Court. The door opened and there he stood. The poet looked just like his work, face and word had merged the inner and the outer.

The fisherman’s sweater cable stitched its way up to that immortal chin. Set inside the head were a pair of remarkable eyes, huge blue grey orbs with a depth I had never seen before close up. After climbing the mountain of the face what startled me was the hair. Seeming as if it was in contact with elemental forces be- yond my ken, it spiraled and gently ascended to the heavens in a flake grey cumulus cloud—it was only much later as George became more comfortable that he revealed that he had washed his hair specially for the occasion and whatever Orkney seaweed shampoo he used always caused this extraordinary effluvia.

In retrospect, George was in as much trepidation as I was. For me, he was the first famous person I had met who I actually admired. I had a Fabriano sketchpad and a huge arsenal of pencils. As I began sketching, George slowly became more reassured and the atmosphere unwound.

Those first drawings had awkward, difficult births, and that first evening had its own deep rhythm. George in the luminous gloom of his front room perched in his ecclesiastically purple draped rocking chair. A space had been carved out of the massive piles of books on the top of the couch for me to sit and draw. Interspersed every so often was the low under song of the wind coming down the chimney, its uncanny tune joining into the scene just to remind us how far North we were, how isolated, how remote.

I had planned the whole venture as a one-day trip to get two or three good close studies of George; however, after the first day it was obvious from the ambiance that I had that sensation that only emerges when a situation has become truly creative. A sure sign of acceptance in Mayburn Court was when the tea began to be diluted with Highland Park single malt whisky. Our proposed one afternoon evolved into five glorious days after which I left reluctantly.

That first meeting proved to be one that would resonate throughout the next 25 years of my career. I went on repeat visits, we kept in touch, exchanging many letters. As a subject, George has grown in importance to me, culminating in my participation in Simon Hall’s award-winning book, The History of Orkney Literature. This is a book dedicated to history of the islands, and presents George as an iconic figure. It collected a large number of my images of George, and late last year, it was a joint recipient of the Saltire Society’s Royal Mail Scottish First Book of the Year award.

George was the ideal mentor to meet when one was a student. He gave his time and inspiration flowed from him freely. He was someone who had forged his talents in the far North of Scotland as I was in the process of doing. Very few artists have emerged from this area into the international art world so it was wonderful to have the last great living writer as a friend and mentor. I am forever indebted to him for his magnanimous guidance:

I believe in dedicated work rather than in “inspiration;” of course on some days, one writes better than on others. I believe writing to be a craft like carpentry, plumbing, or baking; one does the best one can. Much mischief has been caused by a loose word like ‘culture,’ which separates the crafts into the higher arts like music, writing, sculpture, and the lowlier workaday arts (those, and the many others like them, that I have mentioned above). In “culture circles,” there is a tendency to look upon artists as the new priesthood of some esoteric religion. Nonsense—and dangerous nonsense moreover—we are all hewers of wood and drawers of water; only let us do it as thoroughly and joyously as we can. (Brown)

George taught me how to value my craft and link it to heart and intellect. 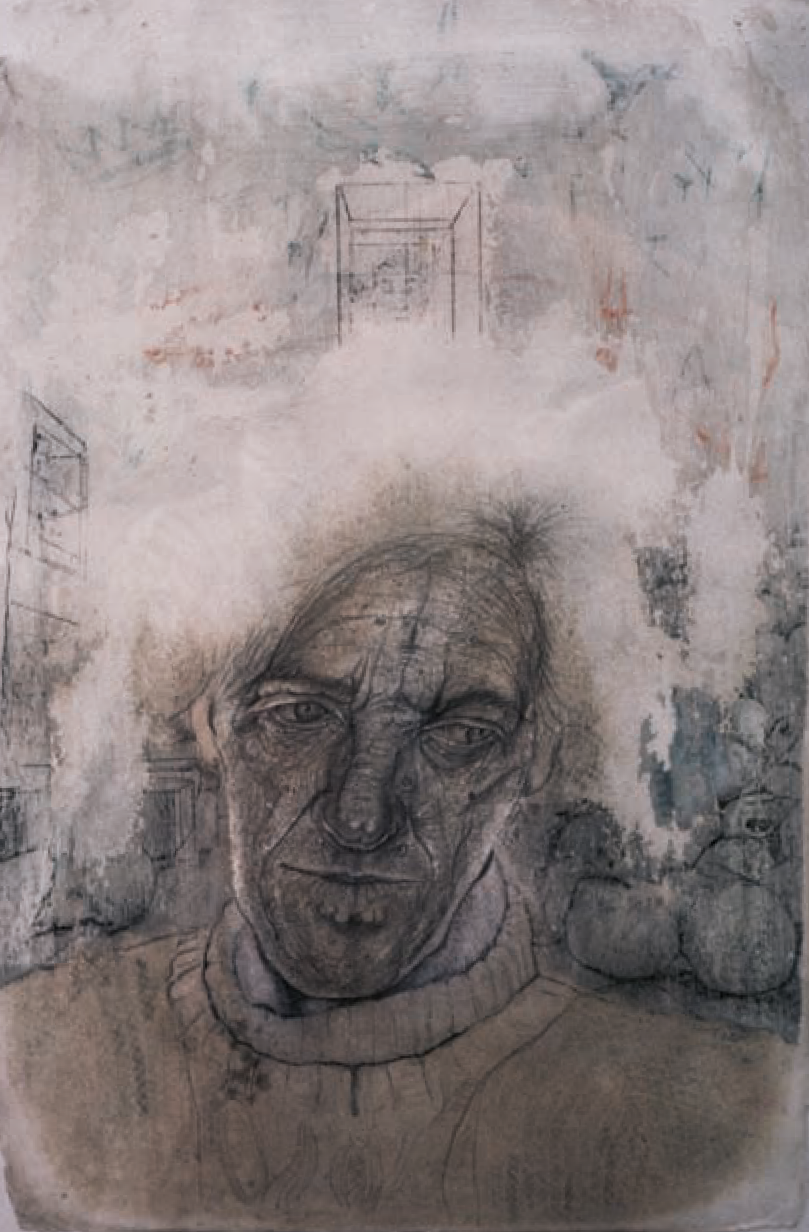 Every word that George wrote was finely honed on the anvil of his experience and beautifully laid in place with the precision of a tapestry weaver. In my work in Hostos I have taken that same ethos into the painting classes. Complete absorption in the craft, linking it with intellect and experience. If one can create this context those students who are willing to explore will find true originality. In this dedicated concentrated voyage original ideas emerge through love and hard work. This is the miracle of true art that enriches and ennobles mankind.

George and I wrote to each other every week for 10 years or so, but one day, a little after Easter in 1996, I turned on the radio and the broadcaster announced his death that morning. On my writing desk in Edinburgh was a letter I had been writing. Of course, it was never posted. Instead, that letter became part of an obituary I would scrabble together for that the next day’s edition of The Scotsman, which was due to carry copious accounts of the life of Scotland’s greatest twentieth century writer.

George’s autobiography was published after his death and although interesting it was not until the publication of A Life—Maggie Fergusson’s biography—that a total account of George’s pains, trials, tribulations and triumphs would be available. Nothing in that book came as a surprise to me. I had always known that George’s fame had come at a high cost. His depressions and failed love affairs and eventual monastic existence in his little council house in Stromness (albeit with a nice Swiss girlfriend down the road to attend to his every need!) were all necessary to forge the great work that emerged.

He was a man who suited old age as it was the best period for the magnitude of his vision. It would have been great to get another 10 or 20 years of brilliance from George’s pen; however, there seems something very complete about the cycle. George’s mystical number was 7 and he went in his 70th year. April as well for a Catholic Christian mystic, the perfect time to go, and which resulted in him being buried on St Magnus’s Day—the patron saint of Orkney who George immortalized in his works.