Just over a year ago, I met a friend who is both a teacher and a life coach. I told her that I had a goal, more like an intention, to apply to a doctoral program. One day, she guided me through a writing prompt in which she asked me to envision something in my life that has remained a constant in my life. Since I had moved several times in my adult life from coast to coast and to various cities, not many things sustained. Yet, my first vision became focused on Hello Kitty. Yes, the Hello Kitty of pop culture! My Hello Kitty came in the form of a “piggybank,” about 12 inches tall, and too big for me to ever fill, even to this day. I bought her from the han Lao aka the “Lao store,” which is literally what it sounds like: a grocery store for Lao kong gin (foods) and other knick-knacks. This millennium was still in its infancy, so I imagine was probably 16 at the time I acquired Hello Kitty.

My friend and I spoke about the possible significance of Hello Kitty in “piggybank” form being one of few things in my material life that has sustained. I’m 36 now. Was Hello Kitty a manifestation of my unfulfilled desires? Possibly. So why the conversation between Hello Kitty and my grandmother? And what exactly were my desires? I wanted answers.

My Ama was quite a woman. She was what you might describe as diligent and dutiful--characteristics that were affirmed in our culture, particularly for women. She was also really sweet and light-hearted. My parents were often working overtime at the menial jobs that this country promised them upon resettlement as refugees, so I spent a lot of time at my Ama’s. I had lots of aunties and uncles to hang out with. My Ama also went to the grocery store every day and spending time with her meant getting out of the house.

One day, she found that one of us kids had left a screwdriver on the staircase. She picked it up and confidently interrogated, “pai ow Scoobydoo ma vai kandai?!” (who left the Scoobydoo on the staircase?!). Words like “screwdriver,” a term we understand to mean ‘a tool that drives screws,’ didn’t carry the same meaning for her. She probably encountered the word but a few times in her life. I have a lot of fun language memories with her as first-generation immigrants trying to reconcile our home language with this new one.

Around the same time I had gotten Hello Kitty I also spent my first summer in California. I had traveled there with my Ama and uncle Som. I didn’t think that when I left it would be the last time I saw my Ama alive. She died from cancer weeks later, just before I was entering my senior year of high school. Yes, college was on the brain. But my Ama was on my heart. When it came time to write personal statements, most of my writings were about my Ama. I was inspired by her memory, her presence, and now lack of it.

The conversation that Ama and Hello Kitty have is a joyful and affirming one, even if it does not start out that way. My Ama was always bound to patriarchal gender norms and I did not want to hide that fact. But the humor, wit, and reassurance she provides are what bound me to her. She encourages me to return “home” to find out who I am. I finally did that at the age of 33, which sparked a transformative period in my life which has led me to CUNY Graduate Center and the Urban Education program as part of Cohort 20.

I was born in Ban Na Pho Refugee Camp on the other side of the Mekong River from my Lao-born family. The Mekong is named so because it is the “mother-river,” and its name can be interpreted in many ways. It nurtured the region’s world famous fertility. It then became a lifeline for people who were escaping the traumas and casualties of a war that was secretly, to the Western world, ravaging their motherland. Something I learned recently was that my paternal grandfather, in order to cross the Mekong, moved the whole family multiple times, settling closer to the “mother-river” each time. There was much suspicion about migration at the time and the People of Laos became more divided along socio-economic and cultural-ethnic lines. This divide would travel with the People of Laos as they were resettled across the world as “diaspora.”

As I finish my first semester of that doctoral program to which I based my intention on, I am reminded again of my Ama. When I think of other things in my life that have remained, it is clear that the memory and legacy of my Ama’s care is still present, as well as the sound of her languaging. Both of my maternal and paternal grandparents are deceased, and the love of my Ama is so dearly missed. She was the glue in our family. However, when I invoke her memory, her words, and her kindness, I am once again connected with our families, our ancestors, and our home. Yet, as I think about answerability, I imagine myself in conversation with Stovall and Jimenez. I appreciate us going to the blocks and buildings that they call home, these places and spaces of home are so entangled in their beings and the relationality they have to home is a phenomenon of their lives, ancestors, and the forces of history.

The thought of truth-telling resonates with me. Jimenez and Stoval both use an illuminating combination of theory such as CRT and methods such counter-storytelling and testimonio. Together they work to ground and validate personal experiences and agency in a larger context. For example, working-class immigrants like my parents who plunged into the depths of an unknown and often hostile sea. They were often busy working menial jobs, but what about those moments and experiences in which we learned America together? How much knowledge and language did my grandmother and I create together during our trips to the grocery store?

Jimenez and Stovall, as well as Patel, do have me in an uncomfortable position in which I am attempting to draw the contours of the communities and the experiences I want to honor and be useful to. I recognize my identity and experiences as a Lao-American refugee. Yet, my family’s inherited suspicion of other People of Laos, and other Southeast Asians displaced during the Vietnam War era, became my own suspicion as an adolescent. I am working to undo and unlearn the empirical and dehumanizing epistemologies that have shaped my view of myself and “my” people. It landed hard in my gut when Jimenez describes her anecdote about Gifted & Talented Education as a juxtaposition of her exceptionalism against the miseducated and disserved students who didn’t receive her distinction. My work seeks to validate the efforts of the disserved, the miseducated, and the marginalized. It must serve as a subversive truth to others in my community who feel seduced by the arbitrary proximity to whiteness that a claim of the Asian-American race affords. The erasure of history, culture, and colonial exploitation for immediate but temporary privilege only reinforces white supremacy and the colonial gaze in research.

Answers may not come in the form of an answer. I am called back to Buddhist teachings that distinguish perception from conception. Most of human suffering is rooted in the idea that the world needs to be perceived: controlled, labeled, and colonized in a way that is useful to capitalist structures. But what would it look like if we were to shift from perception to conception: allowing the truth to be left as an experience? When I first thought about Hello Kitty in that writing prompt, it anguished me to not know why Hello Kitty was there! I had more questions than the one answer I was looking for. Still, through the process of returning to Hello Kitty and hearing her to speak to Ama, I learned to listen. 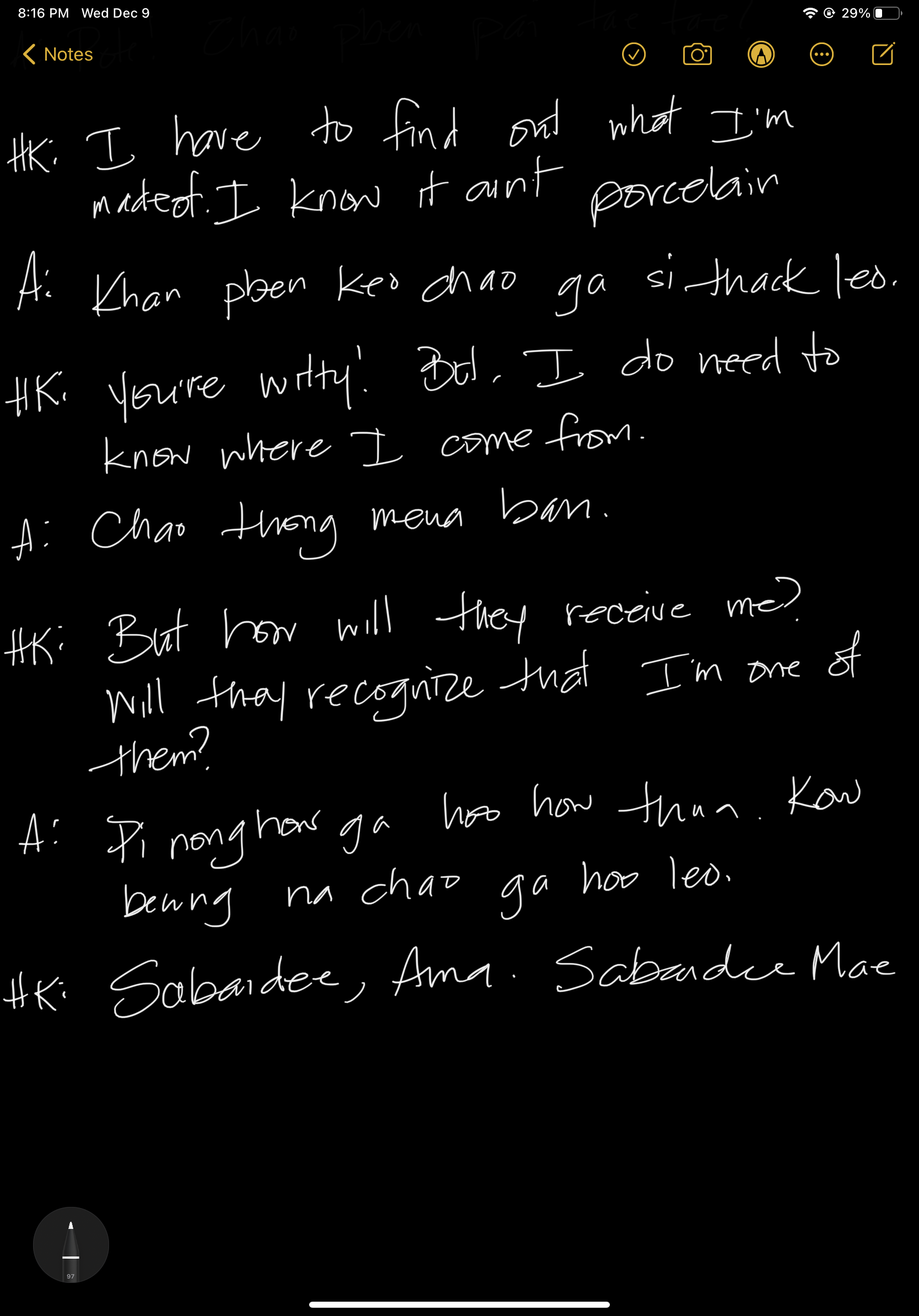