By Linda Miles and Kate Lyons

We have received PSC-CUNY funding to investigate which game and gameplay characteristics are most effective for student engagement, knowledge transfer, and skill development in media literacy instruction. Reporting on the initial exploratory phase of research, this paper presents a novel method for cross-indexing existing and potential games according to specific media literacy objectives, the kinds of learning experiences that happen during gameplay (Gee, 2003; Abdul Jabbar & Felicia, 2015), game type (Grace, 2005), and means of play (such as game board, cards, dice, digital platform, etc.). This cross-indexing will help determine the game and gameplay characteristics to be tested in later phases of research.

Media literacy is not new, but has re-emerged in recent years as a crucial focus within academic librarianship. As the nature of academic research and publishing has evolved, in some cases migrating beyond traditional library interfaces, evaluation of information resources for research has become a more complex task for students. Additionally, the democratization of web publishing has meant that visual and other cues that librarians once taught as fairly reliable indicators of authoritativeness have lost meaning. Researchers recently found that students of all ages generally believed sponsored ads were real news, believed fake/altered user-generated photos were real, and did not consider the bias of sources (Wineburg & McGrew, 2016). “Fake news” and social media channels had a significant impact on the outcome of the 2016 U.S. presidential election (Allcott & Gentzkow, 2017), and 23% of Americans recently surveyed reported that they had shared fake news online, 14% of whom did this knowingly (Barthel, Mitchell, & Holcomb, 2016). Our students will be lifelong users of information, particularly non-academic media. As Americans increasingly turn to social media and the web for their information, it is crucial that they understand how important it is to verify their sources, that they have a process for determining authority in popular media, and that they realize the impact their information behavior can have on their own lives and their communities.

Our first step in the cross-indexing process was to consider the possible ways that games could be categorized and to perform a literature review and analysis of published classification models. As Collolly, Boyle, MacArthur, Hainey and Boyle (2012) pointed out in their systematic literature review, games have been classified “along a number of dimensions,” including analog vs. digital, general purpose, genre, subject/discipline, platform/delivery method, effects, intended outcomes, and impact. For the purposes of our research, we selected four dimensions: media literacy learning outcomes, learning experiences, game types, and means of play.

Learning outcomes for media literacy have been developed since at least the late 1990s, when the National Communication Association (1997) developed standards and competencies for K-12 education. Other examples include Mihailidis (2011), who provided a set of media literacy learning outcomes focused on student activities using a particular media remixing tool; Ashley, Maksl, and Craft (2013), who developed a framework of core concepts for media literacy instruction; and Fedorov, Levitskaya, and Camarero (2016), who surveyed international experts about curricular approaches to media literacy education using a list of twenty different outcomes. After reviewing these projects and thinking specifically about some of the challenges with media literacy we have observed in classrooms or at the reference desk in the Hostos library, we decided to open a discussion with our colleagues in the library to identify the most relevant learning outcomes. We shared what we had learned from the literature and then asked four questons: (a) When you imagine a media literate student’ “(b) What are they able to do? (c) What can they accomplish? and (d) What strategies do they use? We came away from this meeting with a rich, but unorganized, collection of notes. This is one example: that a media-literate student might:

• know that authors have viewpoints

• know some of the relevant questions to test for logic/reason

• understand about logical fallacies such as anecdotal/system evidence and confirmation bias.

We then reviewed this data, selected the elements that seemed most significant and most relevant to our population, made sure that we covered all major areas of media-literacy learning, and translated these concepts into the typical learning-outcome format: students will be able to… in order to… We ended up with the following two-part schema, which allows matching elements from Part 1 with elements from Part 2 as a way to describe sometimes complex combinations of factors.

Learning Outcomes, Part 1--Students Will Be Able To… (LO-1, as noted in the table of games at the end of this article)

Game-based learning experiences have also been categorized variously in existing literature. For example, Paul Gee (2003) identified 36 learning principles attributed to video games produced for the entertainment market. Martinovic, et al. (2014) classified single-player computer games according to the cognitive functions the player engages in during play. We decided to utilize the work of Abdul Jabbar and Felicia (2015), who performed a systematic review of the literature into gameplay engagement and learning, describing both cognitive and affective experiences.

Game type or genre is another way that games have been classified, following traditional practices in literature and film, and there are several schema from which to choose. For example, Herz (1997) described eight types of video games in her book Joystick Nation: How Videogames Ate Our Quarters, Won Our Hearts, and Rewired Our Minds. Lindsay Grace’s 2005 “Game Type and Game Genre” provides a somewhat simpler schema that fits the purposes of our research.

Finally, we decided it would also be valuable to consider the variable for means of play, which we consider in somewhat more concrete terms than Grace’s (2005) game types. Where Grace’s terms capture “description of gameplay” (p. 1), our means of play concern platform and the game players physical relationship to the game itself.

With schema in hand, we began searching for games that address media-literacy themes. We had heard of a few such games via word-of-mouth, particularly during the months following the 2016 presidential election when media literacy became a hot topic among librarians. We also used the Google search engine, employing search terms such as “media literacy,” “news literacy,” and “fake news” along with the word “game”. In the end we identified fourteen relevant titles and developed our own prototype (Bingo!), adapting a headline bingo game from the New York Times (n.d.) called Page 1 Bingo. These we cross-indexed according to the four schema. As we began, we found it somewhat difficult to settle on a single learning outcome in some cases, or on a single primary learning experience, so we chose to allow a secondary, or “other” designation in those situations.

To illustrate how the cross-indexing works, we focused on three example games. 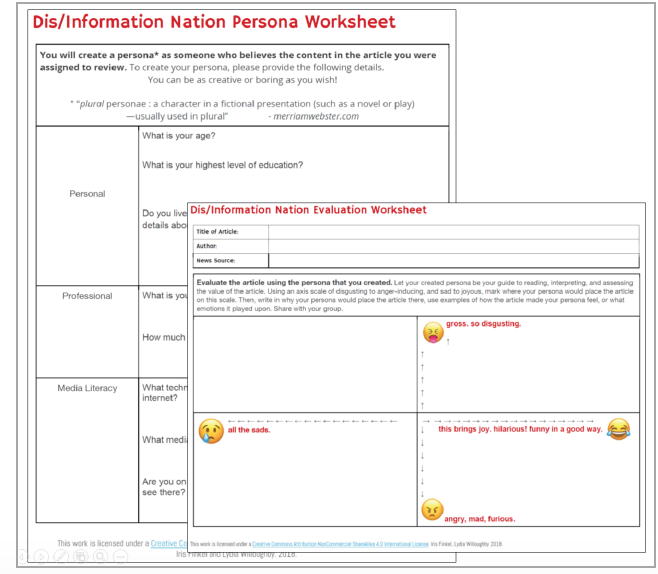 Dis/Information Nation is a role-playing game that explores how personas influence news consumption. Players are each provided with a current viral news article and are asked to fill out a worksheet about the persona of someone who would believe the content of the article--about their personal and professional lives and about their media-literacy practices. Working in groups, each player role plays and introduces themself as their persona, then works to defend their article and convince others that it is true. Players are then asked to evaluate the article from the perspective of their persona. Considering how the article plays into their persona’s emotions, they fill out a matrix that runs from “all the sads” on one end of an axis to “this brings joy, hilarious! funny in a good way” on the other, and to a second axis that runs from “gross, so disgusting” to “angry, mad, furious.” Through fact-checking and discussion, participant groups work together to identify information and intentional disinformation in the articles.

Fake News/Real News is a card game challenging player to determine whether quotations in the news are real or fake. Players or teams take turns reading aloud from quotation cards, and all the other players (or teams) then either toss out a “character card” indicating the person they believe said the quote (if they believe it is real news) or they throw down a “fake news card” to indicate that they don’t believe it at all. The quotation cards have been compiled and fact-checked. This version was released in 2017, and includes quotes from President Trump and current (or now former) members of his administration: Mike Pence, White House Press Secretary Sean Spicer, Chief of Staff Reince Priebus, Counselor to the President Kellyanne Conway, Chief White House Strategist Steve Bannon, and the Secretary of Housing and Urban Development, Ben Carson. 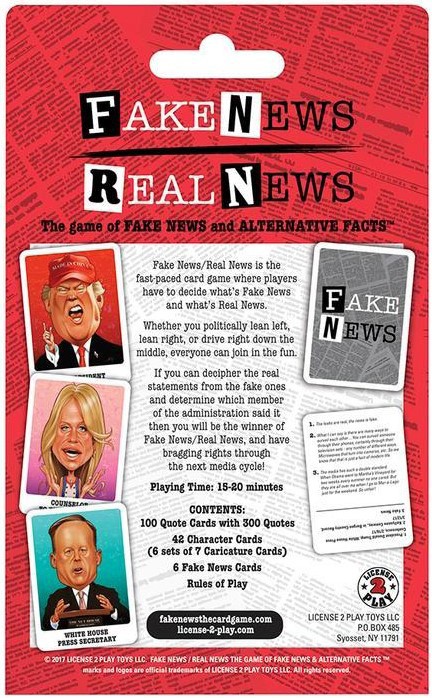 News Hero by the NATO Strategic Communications Centre of Excellence 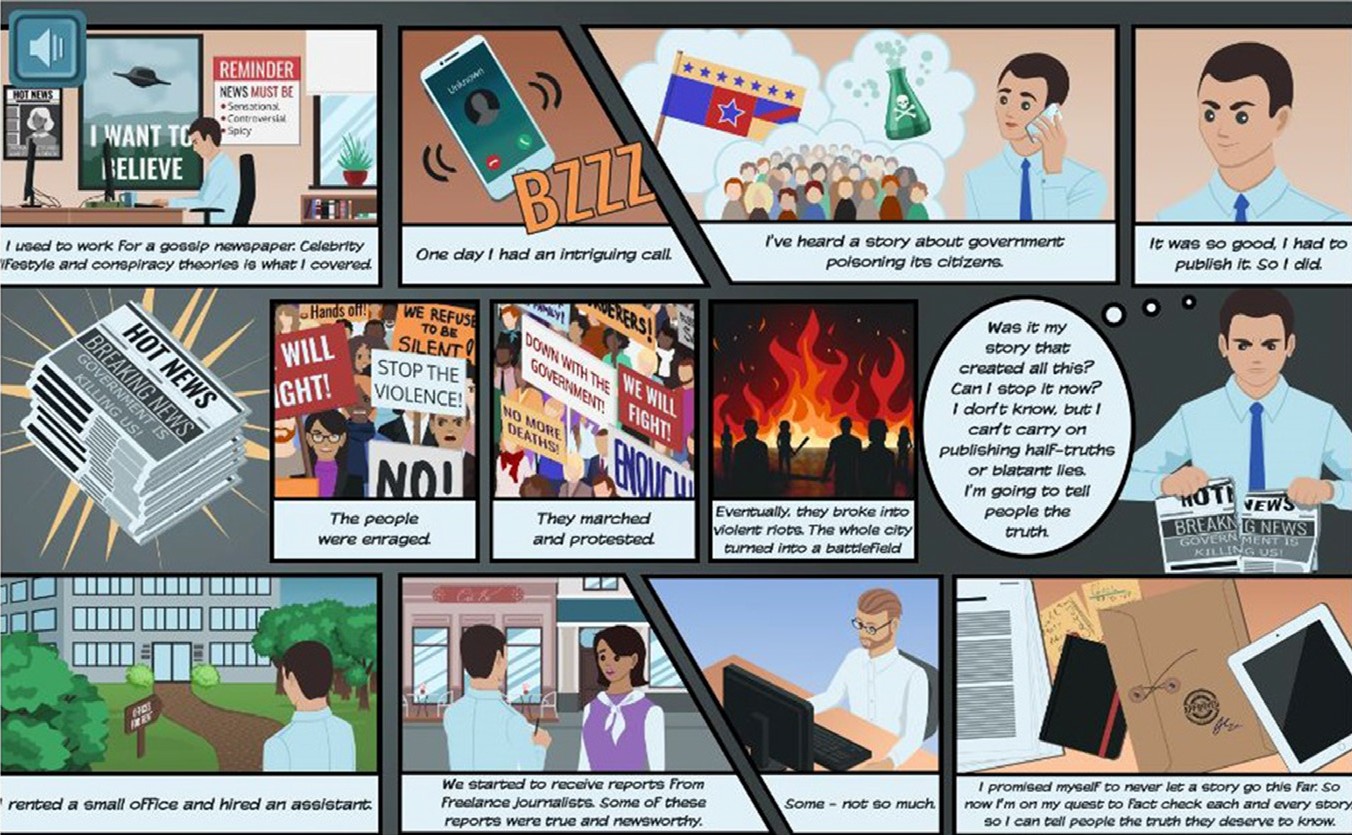 In this Facebook game, the player is cast as editor of a newsroom, and has to decide whether to accept or reject various stories drawn from among actual published online news stories. There is a fact checker in the form of a tablet computer, suggesting important questions the editor might ask themself before accepting the story. Once the editor determines which of the three stories to accept, they send them to the printing presses. For each story, the player is then presented with follow-up information, perhaps a link to a debunking article or suggestions of where the editor might have looked to fact check the story themself. A graphic display shows how the issue performs, and a figure is generated representing revenue--the higher the quality of the issue, the greater the revenue. At this point, you are prompted to “pay your bills,” and you learn how much is left over. You can use these funds to purchase items such as books or an air conditioner for the office.

In spring of 2019, we will begin testing media-literacy games in a series of focus-group sessions involving gameplay, pre- and post-tests on media-literacy outcomes, and brief interviews about students’ experiences. In this exploratory procedure, we hope to determine which game characteristics might most effectively support each learning outcome, there by helping us to determine what types of games to use in a future, classroom-situated research study.

Support for this project was provided by a PSC-CUNY Award, jointly funded by The Professional Staff Congress and The City University of New York.

These results were previously presented at the Meaningful Play Conference, Michigan State University, October 11-13, 2018, and the CUNY Games Conference, January 18, 2019.

Fedorov, A., Levitskaya, A., & Camarero, E. (2016). Curricula for media literacy education according to international experts. European Journal of Contemporary Education, 17(3), 324-334.

Gee, J. P. (2003). What video games have to teach us about learning and literacy. New York: Palgrave Macmillan.

Appendix: Links to Additional Information on all the Games

Fake It To Make It by Amanda Warner: https://www. fakeittomakeitgame.com/about